Throw Down the Gauntlet 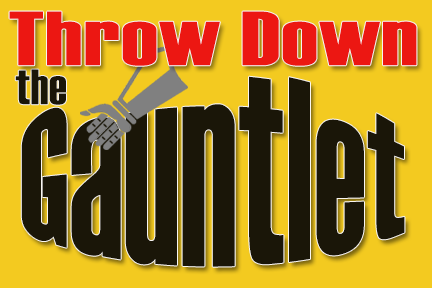 When is enough, ENOUGH?  When will business owners throw down the gauntlet and issue a challenge to their employees?

More importantly, a challenge to THEMSELVES.

THE CHALLENGE? To defeat the ENEMY of all businesses. The adversary who opposes a clean, peaceful, and orderly work environment for employees and clients.

In medieval days, a knight would offer a challenge by throwing down his gauntlet (a metal glove which formed part of his suit of armor). Whereby, another knight (if brave enough) accepted the challenge by picking up the gauntlet.

In like manner, a business owner/leader owes it to clients, employees, and themselves, to THROW DOWN THE gauntlet TO THE OPPONENT OF ORDER!

Make no mistake; the enemy of business order is real and ever-present in daily operations. Its name is CHAOS!

“Wimpy bosses” will not challenge this enemy! Needed is a person of strong resolve and decisiveness. One who refuses, at any cost, to allow mistakes and internal miscommunication to ROB their business due to dysfunction.

If this speaks to you as a business owner, make a declaration today to your employees and your family—there will be no more toleration of this foe.

Remember, if you accept the challenge to defeat chaos in your business; be assured, we will FIGHT with you. We’ll show you how to take it to this adversary with a blow-by-blow approach.

In other words, every time the “enemy of order” attacks and strikes a blow on your business, via employee mistakes or miscommunications, you will respond by strengthening your defensive shield.

This defensive shield is a company-wide SYSTEM SHIELD. One that prompts employees and management to identify places of attacks that get in the way of production and service. Whereby, stopping assaults/errors before they even occur.

Weapons of Warfare Needed to Win

Again, if you make the no-turning-back decision to throw down the gauntlet, we have some suggestions as to where to begin.

Take a tour of a business that permanently defeated CHAOS. This tour will give you an overall vision of how your business can operate once trouncing that old enemy.

Yep, it will take some training when competing to win. But the award is, prosperity with peace and purpose.

Isn’t that what we all hope for?

Unfortunately, we encountered many owners who started the fight, only to give up after a few blows by the nemesis of order. In other words, when push-back from employees and naysayers happened, the owner abandoned the battlefield.

Employees who oppose fighting chaos are those who don’t want personal accountability.

On the POSITIVE side, we find there are many employees who will join with owners in the fight.

The weapons of warfare:

To be sure, there are other weapons/systems; however, with these top 6 implemented, the battle is in your grasp. So, throw down the gauntlet!

Did I mention? Great systems work.