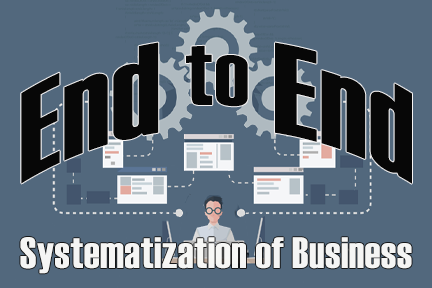 End-to-End systematization of a business starts by identifying those areas causing the most errors, stress, and/or pain. In other words, those places of constant frustration in a business that keep employees scrambling, and owners up at night.

Once identifying each business frustration, the process of implementing a system to stop all non-conformances in those areas begins.

In short, THAT is systemizing a business end-to-end, start to finish!

Surprisingly, when preaching end-to-end systematization to business leaders, the first response is often skepticism. Unfortunately, the concept of systematizing a small business, for many business professionals, appears foolish, ridiculous, useless, futile, and ineffectual.

A few years ago, while giving a presentation on systematization to a large group of executives at the headquarters of a multi-billion-dollar franchise, a stultifying wave of disbelief became evident in the room. Thankfully, many wholeheartedly supported bringing systemization to thousands of their small and large franchisees.

However, although the opposition acknowledged they understood the power of end-to-end systematization of business, they didn’t THINK their franchisees would accept it.

Sadly, the opposition won that day! So end-to-end systemization for their franchisees was not to be.

Surprisingly, having spoken to and visited many of their franchisees, we found each of them operated like independent “Mom & Pop” businesses. It was obvious there was NO defined method of operation required from franchise headquarters.

The result was, everyone to HIS OR HER own way!

We also discovered that many of the franchisees were hungry for end-to-end systemization. In fact, complained to us that headquarters was “falling short” in that area. Yet, they did not want to take on the mission of systematization themselves.

You would think that a large franchise with authority over their franchisees would require them to operate in a stricter method. One defined and monitored by headquarters, like McDonald’s or other well-known franchises.

In fact, the only thing that identified their franchisees as a group was the color of their vehicles, identifying logos, and having similar equipment. NO STANDARDS FOR OPERATIONS!

In fact, the person acquiring the business said, the reason they paid top dollar was due to that “system stuff” the owner had implemented.

Did I mention? Great systems work despite opposition!