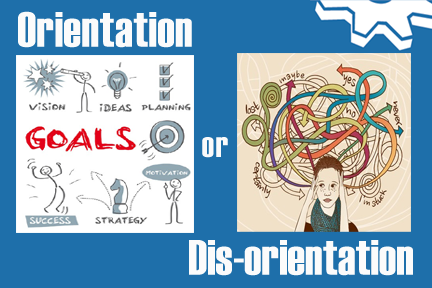 New hire orientation is one of the most critical processes in your business!

Okay, so you thoroughly vetted and decided on just the right person to fill an important position in your company.

You shook hands and agreed on a start date when the new “go-getter” will arrive promptly at 8 a.m.

Surely, he or she will be ready for a half-day orientation process designed to get them off on the right foot. Right?

A great many companies use the more “standard” procedure:

My Story About DIS-Orientation

My own orientation, or rather my DIS-orientation, into the world of printing years ago, was at Kennedy Print Shop in the bayou country of Louisiana. It was an old letterpress shop, about three blocks from the Mississippi River. The company had recently purchased a small Multilith offset duplicator, thus entering into the modern world of offset printing. Letterpress shops at that time were nearly extinct.

I had just taken a part-time job for the summer at a different company, delivering printing supplies to various printing facilities around town. I remember getting a call from my older brother Billy, who was running a Multilith at another shop in town, telling me that Kennedy Print Shop was looking for an experienced operator. Wow, my big chance had arrived—a real job, in a real trade, and I was not yet out of high school.

There was only one problem—I had never actually operated a Multilith press. My only experience was hanging out watching Billy do that. In fact, he would run two presses at the same time. Me? I’d reload paper and keep an eye on one press or the other, to shut it down in case of a problem. Being young and naive, I thought that justified calling myself an “experienced operator.”

So I jumped at the chance to get the press operator job at the old letterpress shop and interviewed with Mr. Williamson, the proprietor, who also operated an old Linotype in his business. I assured him I’d had experience running a press like that, and was confident I would do a great job.

So with not much fuss—no application to fill out, no checking on my references—Mr. Williamson said I could start the next morning.

Hiring by the Seat of the Pants

I was very excited about my $1.25/hour employment and having a full-time job for the rest of that summer. On my first day, I showed up at 6:30 a.m., still half asleep but eager to work. Mr. Williamson introduced me to the shop foreman and a journeyman pressman who gave me my orientation. It went something like this:

“Here’s the press, here’s the darkroom for developing film, here’s the stripping table for stripping up the film. The plates are on the shelf next to the plate burner. Have a great day!”

Now for the Rest of the Story

I grinned sheepishly at the journeyman and told him I’d never actually developed or stripped film—and, “I never made offset plates before, either.” The journeyman looked a bit puzzled and went to discuss the matter with Mr. Williamson, who instructed him to teach me. Well, after a 30-minute crash course in the art of film- and plate-making, my excitement was re-ignited, even if my skill set had some serious holes in it.

My first job on the press that day was to print several thousand No. 10 envelopes using black ink. “Seems simple enough!” I thought to myself. However, it took me over two hours to set up the press, as I struggled to remember exactly how my brother did that—apparently I’d missed a few steps. Envelopes began flying everywhere like ashes from Mt. Etna, and they were filling up the floor around me, as I desperately tried to control the press.

What did I know about balancing the ink and water anyway? With ink all over my hands and face, I could see out of the corner of my eye other workers—all the old time letterpress guys—laughing and shaking their heads at the new long-haired apprentice.

The guy who had given me my 30-minute training finally came to my rescue. I made a few lame excuses and blamed it on the press, but I was busted…I had much to learn. My confidence shaken, and feeling pretty stupid, I was relieved when the journeyman took pity, apparently, and began helping me get the press running, while giving me a few more nuggets from his own experience.

I was almost finished with the job when Mr. Williamson emerged from of his office. Seeing the mess around me, he yelled, “What in the [email protected]%l is going on here?” I never knew a person’s face could be so many shades of red!

Mr. Williamson proceeded to bless me out in front of everyone, for telling him I’d had experience running a press, and then wasting over five thousand envelopes. But, I guess he must have felt bad about getting so angry and said so all could hear, “Do you think you know how to run envelopes now?” Looking down at the floor, I said, “Yes sir, I do!”

Assuming I was about to be fired on my first day, I couldn’t believe my good fortune when he said, a little more calmly, “OK, clean up this mess and start the next job.” A reprieve!

I would think a company would want all new employees to hit the ground running, in order to start paying for themselves. It would only ensure that the company will begin making a profit from the new hire’s labor, sooner than later. In many cases, a new hire getting up to speed can take weeks and, with some positions, even months.

Do you have a Letting-my-people-go System?

I’ll be honest with you—we didn’t use our written Orientation System for a couple of years, while we were struggling for survival during the “great” recession 2008 and 2009.

But I can tell you, emphatically, without our other written systems—that I’ve been encouraging other companies to implement—we would not have survived!

I can also report that over this past year, as we have started hiring again, it’s been gratifying to pass by our conference room and see our production administrator directing our written orientation once again. Our company orientation also includes an hour-long video, along with tests and other tools to help our new hires to be productive on day one.

Important Elements/Tools of Our Orientation System:

Documents Reviewed in Detail with our Orientation Instructor:

Special Policies New Hires are Required to Sign (Kept in Their Employee File):