Daily Routine, Not So Routine! 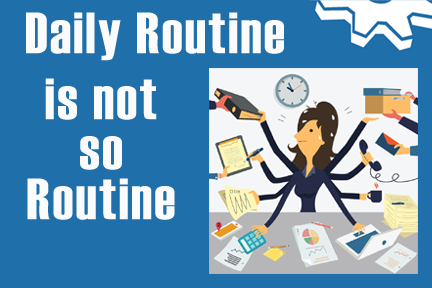 When we first launched our organizational and quality control software, System100, one of our first clients was a business owner from Canada.  “Linda” had a thriving commercial printing company, but was seeking to get a handle on her daily routine operations.

In other words, what was her key employees really doing, as various daily task were NOT getting done. As a result, she became very concerned.

Linda’s printing company had grown beyond her ability to keep the operations in her head, as so many owners do. Therefore, the seemingly endless activities, managing employees; all of it was causing frustration and a sense of hopelessness for her.

There are thousands of items, processes and decisions that must be addressed in a growing company, in order to maintain control. Consequently, as a business grows, the complexity of the operation multiplies exponentially.

Keeping Control Of Your Business

In order to keep control, owners usually just work longer hours. As a result, they spend less and less time enjoying the life they dreamed of, when they decided to start their own business. Linda was typical in that respect, but she was determined NOT to continue business as usual. She was one leader who was willing to change things for the better, whatever it took.

I remember the day Linda and her husband Ron flew down to Tennessee to pay us a visit and see our operations in person.  I spent an entire day showing her, in great detail, the very systems I describe in my book. By the end of that day, she was completely sold on the fact that written systems were the answer to her frustrations. This was the way to bring her company to order, without her having to be there every minute.

She made the decision right then, to systematize her own operation.

A Report That Made My Day

After a few training sessions with us, on how to implement various systems, she called me one afternoon. I could hear the excitement, even as she whispered in order to keep someone in her office from hearing.

“Philip,” she said in a low voice, “I just had to talk to you, I’m so excited!  Only a few weeks ago, I was on the verge of dismissing our production manager, because he wasn’t performing as I expected. Two weeks ago I implemented the Daily Routine Checklist System in our company, and I can’t believe how well it’s working!”

You see, before System100, Linda had had to constantly remind the production manager that certain things needed to be completed. She was frustrated that he couldn’t seem to do that.  When Linda became a client, we had given her a Production Manager’s Daily Routine Checklist that we had been developing for years. Linda simply tweaked it for her company.  And it worked!Sound “simple-stupid”?  Too good to be true?

I’ve heard years of similar reports from other business owners, like Linda.  It never gets old!