Never Judge a System by Its Abuse! 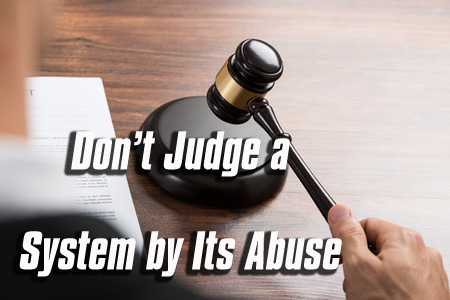 “Never judge a system by system ABUSE!” he said. That last word, particularly, rang in my ears as the talk radio host spoke about some recent, unreasoning criticisms and outright attacks on long-standing and workable systems that have proved themselves to have great merit throughout history.

For example:  The genius of our Constitution and Bill of Rights; the uniqueness of the radio host’s subject, Christendom. And, yes, great business systems that built and sustained a thriving American economy for so long.

But, even near-perfect systems are often flawed by imperfect human beings who assume to tweak, amend, change, distort, or dismiss them arbitrarily, having confused the original intent!

In other words, some of us are REALLY good at throwing the Baby out with the bath water!

In my years as a business owner and systems analyst, I’ve heard the most unfounded criticisms of even the most workable business systems. “Philip, we’ve tried putting in a (this or that) system…it’s too much trouble…too demanding…too much like ‘Big Brother’!  It’s hard to get our employees to use it consistently!”

Truth is, in cases like that, it’s NOT the system that doesn’t work; it’s the lack of knowledge and leadership, the ABUSE of the system, that’s the root cause of failure.

Take, for instance, a Quality Control System. Who is it that runs a business, but doesn’t care about quality products and good service? Sometimes it’s the very ones who think they can just fly by the seat of their pants, and somehow it will magically all come out right in the end—the very ones who wring their hands over lost revenue due to reruns and general mismanagement.

I’ve been watching and improving our Quality Control Systems for over 15 years, and IT HAS SAVED OUR BUSINESS TENS OF THOUSANDS OF DOLLARS. Have I seen abuses in our company? You bet I have! Have I sometimes failed in my leadership and fallen short of our set goals. Absolutely!

But, when there IS an abuse of one of our systems—i.e. failure to stick to it—our company has another system that kicks in, in order to track, discourage and fix the problem. But, that’s another blog for another day!

“Do we as a company, and I as the owner, sometimes fall off the wagon?” he asked. “We do—I do, for sure! But, at least we HAVE a wagon!” he said. “Our competition doesn’t!”

You see, this client understands: as with all good things, it takes effort and persistence to do the right thing, the right way—not just tweaking or, God forbid, dismissing better systems to suit bad habits!

There will be good days, and there will be bad days in setting up really workable systems for your business. You will encounter push back and, unfortunately, abuse. But, implementing and adhering to great systems proves the need of them in the end!

Love to talk with you about that!

Yes, our country has had its failures and setbacks; yes, our faith is often tested; and, yes, our businesses have taken some heavy blows in recent years—abused by those of us who lack (even momentarily) vision and accountability. But, the precepts of those well-devised systems still set a plum-line that should guide our affairs and lead us forward to better days.

We should never abandon good and proven principles—systems—just because of the abuses of some. It’s the difference between exceptionalism and mediocrity!