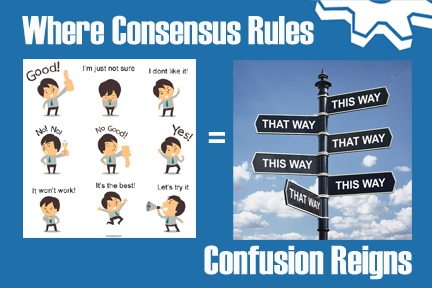 When consensus rules where is the leader?

I mean REALLY—let’s be honest!

Thinking about a phone conversation I had a while back with a struggling business owner, I still get a little hot under the collar!

In short, the owner had serious and expensive problems with constant, repeat errors and called me hoping for an instant miracle cure.

Whereby, over a period of time I gave him my best  thoughts about a workable solution, to put an end to his frustrations. To my surprise, he called me a few weeks later to share, he had POLLED his employees about my suggestions for stopping the chaos in his business.

Consequently, they had rejected the change flat out and said the systems of control we recommended were too stringent. Sadly, these are the same employees who made most of the errors, he added. To say I was shocked would be lying, because we hear this more often than I’d like to admit.

Who’s Really in Charge of Your Business?

I’m still thankful to receive many calls from NOT so wimpy bosses. As a result, these type business owners seek solutions to frustrations many face daily. Moreover, there are leaders that know how to lead! Therefore, when they see problems and see a system to fix’em, they turn straight into the winds of opposition, and won’t turn back. No polls are taken here when they see problems like the following:

Those who take polls hoping for consensus of others may be fooling themselves. Hence, not trusting their own judgment when  KNOWING the truth or what’s right for their own company is fool hearty. I’m not talking about getting an opinion on the color of of the wall in the lobby. I’m talking about an owner KNOWING what’s wrong and how to fix the problems in their business and then standing by waiting for others to agree.

If your business is experiencing costly, repetitive errors in production and service, I’m sure you agree, something needs to change. Therefore, if you find a trust worthy solution you believe will eliminate mistakes, why would you ask those responsible for some of the repeat errors for permission, to implement a workable solution?

Where’s the Lead-ship in Consensus Rules

Why would a business owner who is risking everything he or she has, and who is bearing the weight of ownership, allow ANYONE a vote on whether or not they CONSENT to correcting costly problems? That’s when confusion reigns and the business stalls and an owner loses hope. Don’t be THAT GUY or GAL?

I can just about hear some of the polled employees’ reasoning… [and a suggested response to that]:

“We’ve been doing it this way for years!”
[How’s that working for you?]

“Errors are normal and to be expected!”
[Good excuse for continuing to make them?]

“We tried things like this at my old job and it just didn’t last!”
[How long did this person last at their old job?]

“We like our friendly family atmosphere, and systems are too dehumanizing!”
[What’s more dehumanizing than having egg on your face from bad jobs and losing customers in the process?]

“Quality Control systems slow us down!”
[Mistakes slow everything down!]

“Bob, your best employee, says he’s going to quit if a control system is implemented!”
[Does Bob stay up nights worrying with you about what isn’t working?]

May I offer some further advice here? Summarizing, I suggest that ALL of the reasons above are just so much horse manure. Therefore, are just attempts to keep the status quo at the owner’s expense! Such  excuses (which is what they actually are) fly in the face of everything known about fixing errors in manufacturing and service industries.

Systematizing is Not up for Debate – Stop Asking for Consensus!

For years, the most successful companies have been testing, developing, measuring and re-measuring—to improve and prove solutions for eliminating errors. As a result, saving money, scaling up and continuing the improvement process for all those associated with the business.

Therefore, employee’s interpretation, silly and negative reasoning, illustrated above, not welcomed. Thousands of companies prove daily the worth of great systems, including Toyota, Ford, Starbucks, Nissan and many, many more. In fact, job shop management software with quality control systems is now popular.

Our company measured improvement processes and quality control systems for over 15 years, and I can say emphatically: proven systematization eliminated errors. Therefore, systematizing a business should not up for debate.

Therefore, when employees are asked, whether control systems should be implemented, a negative opinion should be suspect, by the owner. In fact, I believe balking at needed improvement in a business comes with a certain bias. Due to the fact, implementing said solution, would expose certain bad habits of some. In addition, with system, employees are accountable for their non-conformance.

When I decided years ago to fix the problems in our chaotic business, most employees expressed doubt that the solutions I wanted to implement. In fact, many said they would NEVER work. In addition, those closest to me echoed the same sentiments. I did not give into negative opposition.

Nobody is Opposing Wise Counsel Here

However, I’m a firm believer in getting sound advice or wise counsel as a business owner. I believe in listening to employees and getting their take on various subjects. However, I have little to no patience when I hear owners tell me they will make a decision based on a consensus of a group of employees that are content with stepping in that same horse manure, over and over, and calling it “business as usual.”

Margins are too thin, and good clients too hard to come by, to let people who don’t mind living in chaos make my decisions. Furthermore, is it reasonable to still get paid when mistakes happen, AND to have a vote to say NO in the decision of eliminating costly, wasteful errors?

Imagine an NFL football coach taking a team vote, whether there should be practice for improving their game, when their losses are measurable and their fans (customers) have stopped raving about them!

Did I mention? Great systems work, no consensus needed!