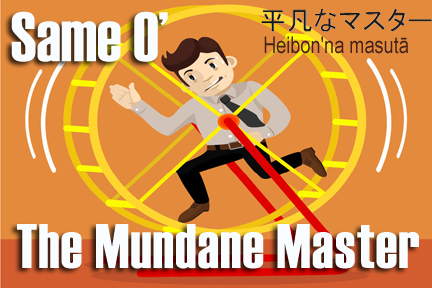 A systemized business can change a disorganized owner or manager, from a “Mundane Master” to a Master over business as usual… same o’ same o’!

Maybe you are filling in the gaps, because you don’t have enough staff, or because someone is out sick. Of course, nobody seems to know how to do their job like the “master,” which happens to be you, regardless!

I know some owners who have been living in the world of same o’, same o’ for so many years, they have allowed themselves to believe this is “normal.”

Some “mundane masters” run like they’re in a squirrel cage, and they’ve taken on a zombie-like personality. They’ve lost their kick, due to the humdrum repetition of managing an unsystemized business. Many owners just become accustomed to it (give in to it), while others will tell you they ‘actually enjoy the redundancy.’” Uh, really?

From Black Belts in Boredom, to Mundane Masters!

As a systemized business owner now, I remember despising that “squirrel cage”, years ago. I had tried various methods of escape many times, then, but just couldn’t seem to find my way out.

However, as “fate” would have it (mostly prayer), one day a good friend named Van came to my rescue. After months of observing me in my cage, running in circles, he brought me a book. He was right, I was bogged down in chaos and the operation of my business and couldn’t get free.

Van was sure his suggestion of a particular book would lead to the door OUT of my cage.  Annoyed, at first, I was a little slow to respond; however, I finally read the book. I can tell you, a light was turned on for me; a vision for how to fix my business. I embraced the book’s seemingly magic words of business enlightenment, and drew a MAP that helped me escape the world of business owners sadly caught up in the mundane.

The “map” I drew started at the moment I opened the door of my business in the morning, until I closed and locked the door at night. It took a while to draw this map, due to the fact that it took up more than one page. Fact is, it became hundreds of pages.

Step-by-Step Processes in a Systematize Business

I came to the realization that all these STEPS were what I was already doing daily; although I had tried to do them BY MEMORY!

With my map in hand, I taught others in my business how to take over some of those repetitive, but highly important operations I had performed. Before coming to the knowledge of truth about business systems, I would have said I was the only one who could perform certain aspects of my business the way I knew the work should be done. I had just been heaping more and more tasks upon myself!

I named my map: Beyer Business Operations Manual.  You may think this is just a boring task, and you’d be right. At times, it was very boring, and at first it added a little more mundaneness to my already mundane world.  But, hey, I was already the “Same O’, the Mundane Master.” Consequently, I knew I could do this, because my goal was to escape the squirrel cage, at all cost.

I wanted to truly OWN my business and have the freedom and excitement I dreamed of when I first began.  I did NOT want just a humdrum job that came with all the added responsibilities of ownership.

The Good News of a Systemized Business

I didn’t have to draw the whole map before experiencing some freedom, because as I drafted more pages and tested the map myself. Then I gave copies to my employees. With each part of the map completed, I gained more hours of freedom from the squirrel cage. It was exhilarating!

I actually started having fun developing these maps (control systems) and adding them into my operations manual. This was my road to freedom from being “Same O’, the Mundane Master.”

After escaping the world of the mundane via a systemized business, I have shared my map with countless other “Mundane Masters.”  Now, many business owners across the country are also shedding that moniker.

[FYI – The book I mentioned above shares about a MYTH that has been proliferated throughout the business world, and how a successful business should actually look and operate.