A Not-Forgotten Hero of Business 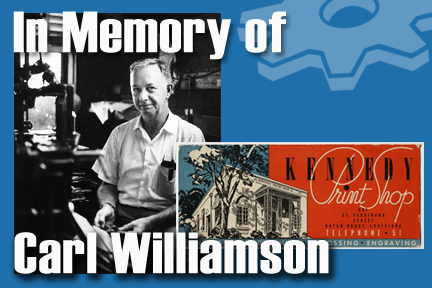 I was privileged to meet a real hero as I began my journey into the business world. I’m forever grateful for that!

It’s an honor to remember and thank any of those business heroes who came before us and affected our world view.

I want to share here, a memory I have of one of these sometimes-forgotten heroes, as business owners and leaders.

It was my first day on the job, as an apprentice in a busy printing company. Exciting stuff for a 17-year old who was confident he would take the business world by storm one day!

In 1966 Kennedy Print Shop was one of the last surviving, fully-functional and profitable letterpress printing shops in Baton Rouge, Louisiana, located just a few blocks from the mighty Mississippi River.

Mr. Carl Williamson, the owner, also operated the Linotype machine that set lead printing type for our printing presses. We also set type by hand, the way printers had been doing for hundreds of years.

It was as if time had stopped, when walking in the door of Kennedy Print Shop. It was a living, working printing museum. I loved it!  I loved the smell and the sounds; and I loved to watch those old machines still operating, churning out printing for businesses all over Baton Rouge! We printed brochures for many of the old southern antebellum homes along the Mississippi, along with Cajun cook books and other regional material with a Deep South theme.

By the time I left Kennedy Print shop for another career, I had learned to operate every one of those old letter presses, including a Kelly Press, Miehle Vertical Press, Kluge Press and a Heidelberg Windmill. I still cherish those memories.

Kennedy Print Shop had recently purchased a 1250 Multilith machine, which was their attempt at transitioning into modern offset printing. That was the press I was hired to operate.  Before being hired, I had assured Mr. Williamson I had experience running that kind of press and knew I could do the job.  The truth was, the only experience I had was watching and helping my hero, my big brother Billy, once-in-awhile, as he ran the same type press where he worked. I wasn’t trying to be deceitful, I guess I was just too young and too stupid to know any better. Carrying the eager confidence of youth, I really thought I could operate that press.

Watching Is Not The Same As Operating

The first job Mr. Williamson assigned to me, was to print 10,000 envelopes. I excitedly set up the press like my brother had shown me a few times. Unfortunately, before I finished printing that job I had ruined more than five thousand envelopes over a period of several hours. Had I not had help from Julian Jackson, another pressman who took pity on me, I would never have completed that job.  What made matters worse was, I didn’t have a clue as to the cost of envelopes, so I didn’t think there was a problem.

When Mr. Williamson came out to check on me, he waded into a sea of ruined envelopes scattered all over the floor. He was furious, to say the least.  His face turned beet red as he chewed me out in front of the whole shop. “I should fire you right now!” he hollered. “You told me you could run a #%$ press.”  While this whole scene played out, the rest of the journeyman printers in the shop were shaking their heads and smiling unmercifully, from ear-to-ear.

After Mr. Williamson calmed down a bit, observing the chaos, he said softly, “Well, I guess now you know how to run envelopes! You do, don’t you?”  I said sheepishly, “Yesss sir.”

“Well,” he said, “since I’ve got so much invested, I guess, we may as well keep you.” I think he felt a little sorry for me and bad about his outburst. Over time I learned he was usually very amiable.

It was the day a Printing Union Boss came from up north to our print shop and informed me I had to join the union or they were going to cause me and Mr. Williamson some trouble. That fellow looked just like you might imagine an old union boss might look. You see, I had been avoiding joining the union, because I had a very independent personality and figured they were just bullies anyway. They were trying to intimidate me right during working hours, so I immediately went to Mr. Williamson and told him what they were doing. He came out of his office, got in the face of the Union Boss, and ran him out the shop at high volume.

At that time, I was only working part-time after school, making about $1.25 per hour.  I continued to work at Kennedy Print Shop for several years, and when my first son was born, Mr. Williamson immediately gave me journeyman wages, which was $4.25 per hour then. I thought I was rich!

Mr. Williamson, who had forfeited a few fingers working in a bindery department as a young man, was still a very dedicated, hard working American small business owner, who also stayed involved in politics to keep the government accountable. The mayor of Baton Rouge, a former governor of Louisiana and other politicians stop by our shop, from time to time. Some did their printing with him, and others just got an earful when he thought they were out of line.

The Example Of A True Hero

Here is a man, a real hero I’d say, who got to work at 6:00 a.m. every morning and left about 6:00 or 7:00 p.m. every night. He also worked a half-day almost every Saturday. I never heard him complain about working; it was just what he did.

To be honest, at the time I didn’t appreciate Mr. Williamson or my job. I didn’t appreciate the fact that, like many business owners, he put everything he owned on the line to be independent. He supplied not only me, but many other men and women jobs with little appreciation for his efforts. Now that’s a hero!

It’s never too late to say, “Thank you, Mr. Carl Williamson, I have never forgotten you!” If it wasn’t for men like you, I might never have pursued a business career as I have. I might never have learned enough to write a book titled, System Busters: How to Stop Them In Your Business, that I believe he would give high marks.

What does Kennedy Print Shop and Mr. Carl Williamson have to do with systemic success?