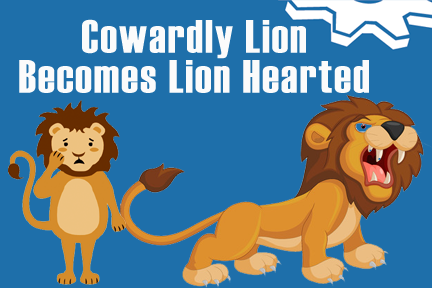 I received another great report from a new believer (in systems, of course) about his new, lion-hearted employee.

“Dave,” a client for more than two years now, called to tell me his latest success story, since he began systemizing his company.

“Hey, Philip. I just implemented the Service Control Checklist with all my lead techs. One of them, who I had planned to let go, has become Leonard the Lion-Hearted! You got a minute?

Let me tell you about Leonard BEFORE systems,” Dave said, and then continued with some excitement.

Example of a Lion-Hearted Employee

“Leonard was a timid guy and not confident in doing his job, and constantly called the office asking for direction. It seemed he wanted anyone else to make the decisions for every job before he’d move ahead. It was very frustrating to everyone in the office! But, I kept him around because, well, Leonard was the fact that he tried so hard. He had a heart for doing a good job, he just had no self-confidence.

“The very first time I introduced Leonard to the system, his eyes lit up. He said he couldn’t wait to try it out in the field. He loved the Control Checklist and other systems that gave him the information to do his job without constant supervision!

“That afternoon, he came straight to my office and showed me his signed checklist with other documentation the checklist referenced. He had checked off every prompt, dotted every ‘i’ and crossed every ‘t’ on that checklist.

“We followed up on the job he had done, and it was one of the most complete jobs we had done for quite sometime. The best thing was, Leonard hadn’t felt the need to call the office every few minutes, as he had before.

“This went on day after day with amazing results. When Leonard did call the office for direction and decisions, it was a simple matter of updating his checklist or other systems. He was now helping us to IMPROVE our systems, one prompt at a time.”

These days my client, Dave, calls MY office with some regularity, often to tell me another success story like the one above.

Now, I don’t want you to think the checklist mentioned in Dave’s story is just a simple, one-page document, thrown together for Leonard in a few minutes. I happen to know a lot about that checklist, because I helped Dave develop it. It is about seven pages long, with hundreds of prompts. What TO do and NOT to do, in various situations. You know, those umpteen variables that some think are impossible to systemize. The prompts keep an employee from repeating the same mistakes over and over! This particular checklist took the owner and me around one hundred hours to develop. Good news is, now it only needs to be tweaked when there are important changes to processes.

You’re probably saying, “Are you kidding me? I don’t have that much time to give to developing a checklist!”

That one, detailed checklist was not created to heap work on poor old Leonard. It was to organize the steps in the duties he was already trying to perform each day! They had often confused him and caused him to take up other peoples’ time, to help or explain over and over. Using the checklist we took the time to develop, Leonard now knows EXACTLY what steps to take.  Now he never has to worry about forgetting anything.

How many hours do you think are spent handling the chaos in your company, or answering the same questions ad nauseum? I would venture to guess someone could build several 100-hour systems in that time!

A checklist that empowers an employee to work more efficiently may take many hours to build at first. However, when it’s done, it may turn a “lamb” into a lion, a “cowardly lion” into a lion-hearted employee—a timid worker, into one of your best!

Did I mention? Great system work!