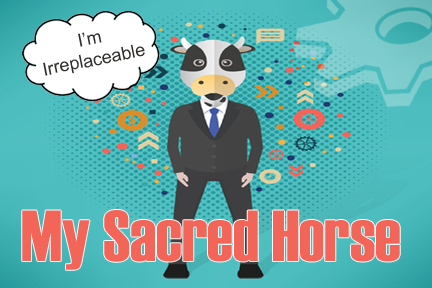 My friend Kent could always make me laugh, but he was serious this time, which made it all the funnier!  He has become a very special client and also a good friend.

When he called me last week, excited about getting rid of his “sacred horse,” I was surprised. I didn’t know Kent had any horses.

“My sacred horse!” he repeated.

It was still not clear to me, but something was definitely different from the last time we talked. He had been pretty frustrated with business concerns then, as he tried to bring order to his operations.

“It was a hard decision,” Kent continued. “But, just like you wrote in your book, I had to make the tough decision to let my “sacred horse” go! You know, MICHELE!” (Not her real name)

“Oh, you mean you let go of your sacred COW—not HORSE,” I said, finally understanding. I hoped my erupting laughter wasn’t putting a damper on his enthusiasm, but he just joined in the laughter. I was well aware of how important “Michele” had been to my client’s operation. She knew everything about everything, and he was sure if she ever left, everything would fall apart. Michele had become like a “sacred cow” in his business, and they both knew it!  His phone call told me he was finally relieved of what had become a burden for him and his company.

In my book, System Busters: How to Stop Them In Your Business, I wrote the story of a once key player in my own company. “Maggie” was one I had also feared losing, although she could be difficult at times. I had depended so much on her “expertise” with all our operations, I was sure, if she ever left, our company would be in big trouble. Others in our company had the same fears.

Like many owners, I had danced around the issue and made special provisions for this “special” employee; admittedly, MY “sacred cow.”  Maggie was knowledgeable about every facet of our production, and I thought of her as “crucial” to my company. I allowed her to get away with things others could not, even as it risked alienating my entire crew.  That had to change. And it DID, when I learned the power of systems!

But, back to my client…

Over the past year, I’d spent more than 400 hours with Kent and his employees, building and implementing systems to bring order to his business. His “sacred cow” (Michele) was the go-to person for almost everything. She wielded a lot of power in and over my friend’s business and, for reasons I would learn later, often worked 10-14 hours per day. It seemed without HER, the company could barely function.

Kent and I worked long hours with Michele, to convert the detailed information she just carried around in her head, into written systems. We needed the information to build a written Daily Routine Checklist and a Master Quality Control Checklist. There were many tasks, steps and variables that Kent had given Michele charge over, only adding to his concern that she was somehow “irreplaceable.”

Writing It Down | Most Important Business Process

Truth is—what Michele did was not hard to understand, once it was written down in detail!

One of the control checklists we began building, for setting up a new project, turned out to be nine pages long. Michele had prided herself on remembering each of the complicated steps in each process. But, even in an emergency, no one else in the company could step into her job, because it was all in her head. Human beings often forget things, and mistakes are made that can be very costly, without written prompts.

After we completed the checklist, I told Kent, “No wonder you were losing money on jobs, and making so many mistakes! How could anyone remember even one page of this, let alone nine pages?  Michele was having to work so many hours, because she was doing it all by memory!”

Many times, Kent himself had ten different projects in process. Imagine the chaos!!

After building and implementing these systems, my friend Kent was excited to finally understand what everyone in his company did, also when they did it. Now he had control of his operations through the power of systems.

Sorry to say, his “sacred horse,” as he called her, didn’t see it that way!

With systems, Michele was finally accountable for mistakes Kent could now easily see could have been avoided. Was she comfortable working in chaos? One thing I know: in a chaotic environment, it’s easy for one to hide in the messes and point fingers at others when mistakes happen.  Fortunately, with proper systems and quality control check lists, mistakes are kept to a minimum.

According to my client, Michele would not adhere to the new quality control systems—she said, “I just don’t like them.” So, they parted ways and Kent was able to hire someone who embraced systems and order in his business.

Is there a “sacred cow (or horse)” in your organization?  Someone who might be a deterrent to the growth of your company, i.e. resistant to new ideas or new technologies; clinging to comfortable old habits; maybe a “my way or the highway” mentality that needs a long, honest look?

A few days after my client’s enthusiastic “horse” call, he called me back even more excited, “Things are running better than ever, and more of my employees are buying into these systems!”