Employee Turnover—Four Steps to “I QUIT!” 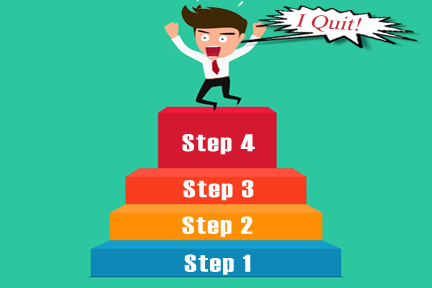 There’s a predictable reason for employee turnover in a company, and it’s not what you think!  Just when you feel you have all your key positions filled with the right people, someone walks out the door, leaving you high and dry!

What is it with Employee Turnover?

In this economy, it may not be possible to give someone a raise to entice them to stay with your company.

You may be in an industry that doesn’t allow for higher wages, due to competition. OR, the job doesn’t require a higher skill set. In some industries turnover is just a fact of life, HOWEVER …

You CAN slow down your employee turnover rate!

Why do some employees quit a company where they are receiving the standard pay rate for their position? It’s likely they will just go to work for another company, in the same industry, for the SAME pay. On the surface this doesn’t make much sense. OR DOES IT?

Maybe the following story will shed some light on this problem…

Several months ago, I was in the middle of a two-hour Webinar demonstration of our software with two owners from the same industry.  During the course of the demo, I received positive feedback from Owner #1, but a lot of push back from Owner #2.  Owner #2 became frustrated as I went over the various systems that help organize a company, explaining why control systems are necessary.

Suddenly, he stopped me with, “Philip, we are a very organized company—in fact, we are one of the most organized companies in our industry.  Furthermore,” he said, “I was mentored by the original owner of this company who was all ABOUT systems. I get what you’re saying!”  Obviously I had hit a nerve. “I don’t want my people getting bogged down with Quality Control Checklists, Daily Routine Checklists, and all that. Our techs are highly trained and, frankly, this seven-page checklist would be an insult to them!”

Okay, So Answer One Question For Me

“Bob,” I said, “I don’t want you or your employees doing anything that will bog them down and cost you time and money. But, answer one question for me. Do your techs process jobs consistently, meeting your own high quality standards? I mean, do they process the jobs as YOU would, if you were doing every job yourself? You know, if you were onsite watching every step they make?”

“Okay, Bob,” I said, “I believe that’s the level of quality and accountability that’s needed, and what you’re looking for. You’re right, seven pages is a long checklist! But, is there anything on that checklist that your tech isn’t doing, BY MEMORY?”  “I know other companies in your industry that are using them successfully, saving time and money. If one of your tech’s misses just one or two steps/prompts on this checklist, it can be very costly for your company. The job would be placed on-hold until all steps were done correctly. Right?”

I completed the demo, thinking I had really upset Owner #2. Maybe I was too pushy and he would never become a client, as he’d hardly spoken after our exchange.

With Checklists, There’s No Need to “Remember”

Four days later, I was very surprised to get a call from Bob.  He said, “Philip, I have been doing a lot of thinking about what you said in the demo, and about the detailed checklists you demonstrated.  In fact, as I’ve been watching my managers interact with our techs, I’ve repeatedly heard them tell the techs, “You need to remember [this or that].”  Bob had called a managers meeting to ask them about that. “Why do we have to ask our techs, over and over, to ‘remember’ so much detail, to the point of frustration?” The answer was clear.

Bob admitted that he was beginning to see the reason for employee turnover; why people get frustrated and QUIT.

Think and Grow Your Business

Obviously, Bob had done much thinking and soul-searching, since the last time we had talked. I was happy to see he had come to some serious conclusions. “I see now, it’s not fair,” he said, “expecting so much of employees, when we really don’t have systems to deal with many of our issues. Okay, Philip,” he said, “What’s the next step? I’m ready to commit to these systems and we want to come aboard.”

To make a long blog short, Bob is now encouraged that he won’t be seeing a repeat of those four steps, as it was before. He’s become one of the most tenacious client/owners we’ve ever worked with. Bob has personally taken charge of implementing and tweaking all of the quality control checklists and other control checklists with renewed enthusiasm. He’s even bringing NEW ideas for continual improvement.

Now it’s MY turn to be encouraged!