Turnkey a Business | A Two-Bird Approach 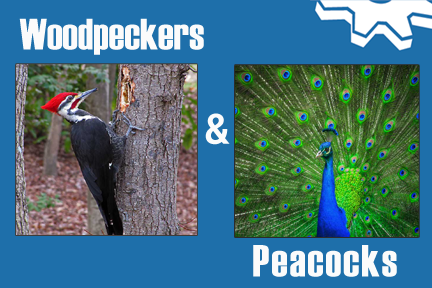 Pod-casters have taken over my forty-plus-minute drive time most weekday mornings, over the past few months. I especially enjoy listening to those who interview authors of business books. i.e. Turnkey a Business, etc.

A certain guest author was speaking about his former boss who often shared his approach to marketing using the analogy of the habits of woodpeckers & peacocks. I found that more than a little interesting, thinking of the various management styles in business; as I reminisced about the many “Peacocks” I’ve encountered.

How Few “Woodpeckers” I’ve Met over the Years

Mr. Peacock is a very proud bird. When motivated, he’s known for putting on quite a show.  He struts around pridefully, while those around him are captivated and inspired; so long as he’s able to fan his best, most colorful attributes. Always a “Wow” moment!  However, soon the law of gravity comes into play and Mr. P tires of his effort to keep his plumage up, and all his brilliant, iridescent feathers assume their former position; actually dragging the ground.  But, stick around and there will be another “Peacock moment.”

On the other hand, Mr. Woodpecker is normally heard working with a steady tap, tap, tapping, LONG before you ever see him.  Moreover, when you do see him, his head is down, as he’s focused on the business at hand—always tap, tap, tapping.  It’s not very inspiring or entertaining; in fact, it can be downright annoying—but his efforts, nonetheless, are purposely consistent.

Nice, that a Podcast guest author allowed me a brilliant analogy for how to organize a business via systematization. In other words, to TURNKEY a business that runs WITHOUT the owner’s constant onsite presence.

Using the analogy of the Peacock and Woodpecker, we begin!

The Mr. Peacock Approach to Turnkey a Business

Business Owner #1 (“Mr. P”) reads a book, attends a seminar, or reads an article on, i.e. how to organize a business in a systematic way.  He becomes inspired and motivated. “Mr. P” is excited, brimming from ear to ear—and, for those around, he seems larger than life; as least, larger than normal.  He wants everyone in the company to be a part of the show and hear from him about the book or seminar that has inspired him so.

Mr. P’s enthusiasm is infectious, and everyone in the company gets excited, shouting, “Yessss, this IS brilliant, let’s do it!”  So, things really seem to rock for a while, as the colorful show continues.  However, after a period of time, procrastination sets in, and the daily grind of business begins to ruffle everyone’s feathers.  The air of excitement begins to dissipate and, before you know it, things are back to normal; the plan to systematize, in order to eliminate the company’s chaos, is on the back burner.

The “Peacock moment” is gone and “Mr. P” is back to being frustrated—again, he’s unable to leave the building without chaos breaking out.

But, take heart, dear ones, because if you stick around long enough, “Mr. P” will attend ANOTHER seminar or read another business motivational book, and yes, he’ll be back; the brilliant iridescent feathers, the strut, all of it, BACK.  Another Peacock moment!  But, how long will THIS display last?

The Mr. Woodpecker Approach to Turnkey a Business

Then there’s Business Owner #2 (“Mr. W”), who also reads a book, attends a seminar, or reads an article, i.e. how to organize a business in a systematic way.  Like Mr. P, “W” also becomes inspired and motivated.  However, something happens differently at this stage from the way “Mr. P” approached the inspiration.  “Mr. W” has been doing a little extra research, and has learned from our blogs, that it takes time to implement an idea, one that will work consistently day after day—you know, tap, tap, tap? “Mr. W” knows that consistent, rhythmic tapping will only take place when the right SYSTEM is implemented, to guarantee the tapping continues.

So, at this point, “Mr. W” bows his head and begins tapping out a designed system. This will ensure his new idea will be added to all the other ideas that are now consistently operating in his turnkey business. Moreover, this approach will grow and organize it, so he doesn’t have to be onsite. Therefore, he can do the things he has always wanted to do, but never had the time. No bird brain here!

“W” has been quietly tap, tap, tapping on his systems for a long time, and it’s enabling him to achieve his goal of a turnkey business. He’s not interested in putting on a show, just removing the things that bug him.  He now has a totally cooperative team that works the system with him toward the same positive goals—you know: birds of a feather… and all that!

“Mr. W” will be heard long before you see him; his systems still tap, tap, tapping away, even as he’s able to fly away on holiday, or south for the winter, to enjoy the beach, golf, or fishing. Maybe bird watching? Take a lean tour of Mr. W’s business after he was finished tapping. After you’ve taken that tour, you may be impress to learn Mr. W is now a developer of small business management software for several types of industries.