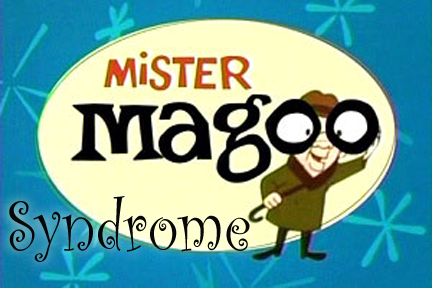 Is your business afflicted with The Magoo Syndrome?”

Driving my three grown sons to lunch the other day, I looked in my rear view mirror, only to see two sets of eyes fairly bulging out of my younger sons’ heads in the backseat!

“DAD!! Watch where you’re going!” their big brother Paul hollared from the seat next to me, as he white-knuckled the dashboard. We had just missed another… what?  lamp post?  mailbox?… while I philosophized about politics, the economy… something or other.

Crisis over, the boys had another example of me driving like “Mr. Magoo.”  My sons wailed with laughter.

It was mildly rewarding somehow, watching my sons craning their necks and stomping on imaginary brakes at every intersection and lane change, as I drove on.  Paul, my eldest son, couldn’t help commenting, “Dad, you definitely have The Magoo Syndrome, when you drive. You seem totally unaware to all those folks blowing their horns and giving you bad looks; not to mention certain gestures.”

If you’re old enough, you may remember Mr. Magoo, a cartoon character my boys and I enjoyed when they were small. Blind as a bat, the character wore what we called Coke-bottle eye glasses. Regardless, he drove around in his motor car, wreaking havoc wherever he went. Magoo seemed oblivious to everything, as buildings and debris fell around him—people running for their lives.

Yet despite his blindness, somehow Mr. Magoo managed to avoid one near disaster after another!

The Magoo Syndrome in your Business

For all my VEHICULAR challenges, it’s easy for me to see The Magoo Syndrome is prevalent with many business owners and managers. Many seem unconscious or indifferent to the pitfalls, errors, bottlenecks, interruptions, and miscommunications others see. Not to mention, the clutter of paper and other materials strewn all around their offices and plants!

Unfortunately, if you bring it to their attention, they’ll likely say, “Yes, yes, I see it, but we’re still making a profit. And besides, I don’t have time to clean it up. That’s the way it’s ALWAYS been around here!”

How can you argue with that logic when a Magoo-type business owner seems, somehow, to always land on his feet?  Well, to tell the truth, you can’t!

However, you might remember—in the cartoon, while Mr. Magoo was smiling, singing and enjoying his day; bedlam breaking out all around him—it was the OTHER people who were the recipients of his erratic and hazardous handling of his vehicle. Those OTHERS were the ones crashing into each other; constantly trying to avoid wrecks, and having to pay for his recklessness.

In the real world, being oblivious is not quite as funny as in the Magoo cartoons. The Mr. Magoo’s in business risk NOT landing on their feet, eventually.  They will pay a high premium by failing to pay attention to certain others around them—operating as if they haven’t a care in the world.

Cure for The Magoo Syndrome

It’s about How to stop the Magoo Syndrome in your business, if you happen to have it!  It may be just a pair of glasses is needed to see the chaos around you. Otherwise, if you stop and listen, you might hear all those legitimate, frustrated cries of employee and customer complaints.

Hopefully, this would be enough to wake up a Magoo, so they would change the way they operate!

May I suggest, if this is you—before your employees and customers walk out the door, you might take some time to read a few books on how to stop the “Magoo Syndrome” in your business. The answer is just a link away.

I believe, as owners or managers, it’s our responsibility to make our working environment WORKABLE for everyone!

As for me… looks like I might benefit from a Driver’s Ed refresher course… another good system!