Systems Management Even a Child Could Understand 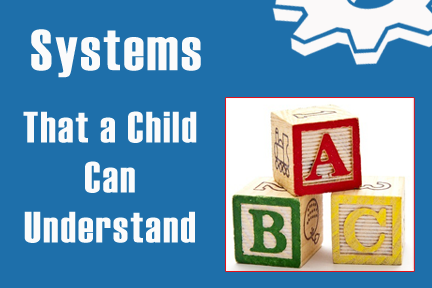 Systems management is the key to managing a growing company! It never works to just micro-manage people. The idea is, to implement great systems and let the systems manage the people. You make the systems so simple, even a child could understand!

It was nearly six years ago that Richard, one of our salesmen, stopped by my office, one morning, for a visit. He had been selling for our printing company for about a year then, and had become intrigued with our systematic approach to production. He “loved” the software we had developed to ensure quality and service for businesses.

Richard finally ask if he could join our software company, because he believed his marketing and selling skills could be better utilized there. He shared his ideas for marketing, and I was glad  to move him over to the software company. Actually, it turned out to be a win-win for all of us!

Richard came by my office again, after working in his new position for several weeks. He was all excited about a “home experiment” he had done, using the systems.

Apparently, Richard’s wife Jenny had come to him, upset about their two small sons not cleaning their rooms. She was tired of the boys not doing their chores, and her having to fuss at them. Jenny insisted Richard take charge of making sure the boys completed their tasks, especially, in their rooms.

Systems Management even for Rascally Boys

Richard heard me say many times how we need to, “Manage the system, and let the system manage the people.” So, he had undertaken to build a special system at home, just for his boys.

He bought a whiteboard for both the boys’ rooms, on each of which he had written a step-by-step checklist. There, each boy had a list of things to be done at home, before AND after school. Additionally, Richard made sure their toys and other items in the room had a designated location for storage. The whiteboards listed doing homework and other chores; even brushing their teeth.

Once the lists were completed, he instructed his sons on how to use them. They were to put a check in the checkbox next to each task, but only AFTER they had completed each one. Moreover, when everything on the board was checked off, they were to call him, and he would do an inspection.

This went on day after day, week after week. Richard and his wife were amazed that the boys seemed to actually enjoy doing the checklists. Checking the boxes after completing each chore seemed to give them a sense of accomplishment.

Richard made a few adjustments to the checklist along the way, and it had actually put an end to the fussing and arguing.  Best of all, he and his wife didn’t have to stand over the boys supervising anymore. However, his wife had to admit she felt a little sad about it. She was concerned that the new system might be taking the place of her mothering. “Go figure!” Richard had laughed.

The Simple Reason the Checklists Worked

No one enjoys having someone breathing down their neck and monitoring every little thing they do; children, especially. Doing chores is like pulling teeth, for children AND adults, when it’s cutting into their “play time”. But, checklist control systems empower people to do their job consistently, and error-free. The good news is, for the most part, they can accomplish all tasks unsupervised. The boys liked that a lot!

Consider this: If you tell 10 people to clean a house, you will get 10 different results. Why?  Because, what “CLEAN” means to one person may mean something entirely different to another person.

Maybe you’ve asked someone to do a task, and then been frustrated with them, because they “didn’t do the job RIGHT; the way I would do it.”  SOLUTION: make a detailed procedure of EXACTLY how you WOULD do it!

Give people easy access to proper tools, and the information to do their job, then stand back and be prepared to be amazed!

Systems are the answer to bringing the right order to every area of your business. They’re not just child’s play!

Did I mention? Great system work!