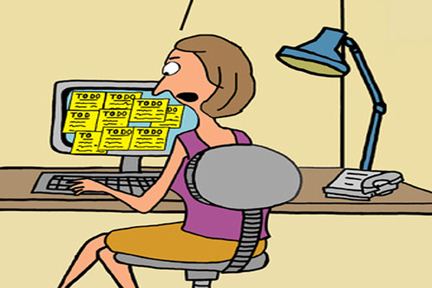 Post-it notes were a huge boon to office work; however, a Post-it notes SYSTEM used for every communication or reminder can be a bit of a “sticky wicket!”

I had been in a certain office several times, and it had always been immaculate. Now it looked like the aftermath of a hand grenade, loaded with various colored Post-it® notes. The walls, desk and computer were covered in them!

Back in the mid ’90’s, I was selling for our print business, as many owners of small businesses are disposed to do. I landed a very nice account with a company that had ten locations and it nearly doubled our company’s sales.

We had developed a good relationship with this customer’s general manager, “Barbra,” a very capable administrator and business person. All went well over the next five years, until another company in town, planning to go nationwide, hired Barbra away. She was to oversee the expansion project and head up their operations.

I was concerned that we would lose the five-year account, until it became apparent we would be printing for BOTH companies. Moreover, Barbra told me that part of her job negotiations was, if she took their job offer, she wanted my company to have all the printing.

Wow! Another confirmation that we were doing something right!  My journey into the world of Quality & Service Control systems was still fairly new, but Barbra was a witness to these systems in action all those years and she had become a strong supporter, seeing how we had continually improved in serving her company’s printing needs.

However, within days of Barbra’s leaving the company, we began getting calls from the new General Manager (I’ll call her “Judy”), and also from the managers of our customer’s various locations.

“Where is the printing we ordered two (or more) weeks ago?” they would ask.

It seemed every day now there was a problem with a business running out of printed materials, and our company was being blamed.

Finding the Root Cause of the Problem

It became an all out mission for us to find the ROOT CAUSE of the problem. Why were orders NOT being delivered on time? Had we even RECEIVED all those orders?

“Judy” was not very cooperative in helping us get to the bottom of what was happening. However, as we still had good relations with some of the location managers who WERE willing to help us, we soon determined the cause.

We discovered that Judy’s new purchasing agent from the main office had not been sending us the purchase orders she had been receiving from the various locations.

Fact was, the new purchasing agent was letting all those purchase orders stack up on her desk. To cover herself, she had changed the dates on the orders to make it appear that our company was at fault for missing delivery dates.  So, I called Judy and arranged a meeting to show her evidence of the changed, actually forged, purchase orders. I took the opportunity discuss many other issues that had been problematic lately.

We had never had such a problem with non-conformances, because by that time we were a well-systemized company. Our on-time delivery rate was 99.7 percent, and our rework ratio was a pretty consistent 1.5 percent or less. All that could be proved through our System Buster system that tracks ALL non-conformances, and how we fix them permanently.

When I arrived at the meeting and walked into Judy’s office I was stunned; scanning the room in disbelief. As I said at the start of this article, I had been in this office several times when Barbra had been in charge and, unlike Judy, she had always kept it immaculate. Now it looked like the aftermath of a hand grenade loaded with various colored Post-it® notes. The walls, Judy’s desk and computer were covered in Post-it® notes!

I had never seen anything like this before, and I’ve seen some pretty chaotic offices in my time. In fact, I write in my book “System Busters” about my own cluttered office, years ago, and how I had finally found the cure for all that. It was only when I discovered the power of systems and implemented what I call the “100% System of Cleanliness.”

While Judy and I were discussing those pesky non-conformances, I showed her the original purchase orders with the CORRECT dates. WHY, I wanted to know, had the dates been changed on her copies? I offered solutions to fix the problem that would take little effort. But, Judy seemed rigid and unable to recognize that, with just a few tweaks to their systems, we both could avoid all these problems. She wouldn’t now be getting panic calls from her location managers; something that rarely happened with Barbra.

Apparently, Judy had joined that company hoping to bring her own print vendors in with her. I soon realized that she was purposely looking to find fault with our company. It was clear, our company wouldn’t be her print vendor much longer, and I was getting nowhere offering suggestions for any improvements to their purchasing system.

So, what about all those Post-it notes?

Judy made it clear, that what I was looking at was HER system. She had everything she needed to remember posted all around her, so she wouldn’t forget anything.

I would certainly NOT recommend Judy’s Post-it® notes system!

The BAD NEWS was, we LOST a very good account. And, I found out later, Judy had also lost her job.  A “LOSE LOSE” for all of us!

The GOOD NEWS for us?

Barbra—having come to know the value of quality control systems—brought our company along with her to her new job.