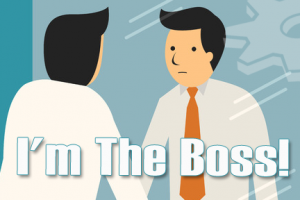 I am one of seven brothers, and you can imagine the “king of the hill” games we played as kids. As one of the youngest, I’d get lots of orders from the bigger brothers, and bravely stood up to them with, “You’re not the boss of me!”

I didn’t know then, how true that statement was!

Recently, I was having lunch with a young business professional I’ll call “Edgar,” the only sales person for his own company. While discussing his business, Edgar confided in me that he had started coming in late.

“I’m not doing the things I know I should do to move my company forward,” he admitted matter-of-factly. “I’m sure you understand, there are times I’m just not motivated and don’t really FEEL like doing anything!”

Cruel to be Kind but in the Right Measure

“I tell ME what to do and when to do it. Furthermore, when ME says, ‘I don’t feel like coming into work early’ or ‘I don’t want to make 40 sales calls a day,’ I say to ME, ‘That’s too bad!’ I tell ME, ‘You ARE going to do it anyway!’ It doesn’t matter what ME says or how ME feels.

“I‘M the BOSS of ME—and ME will do what I tell ME to do—period, end of statement!”

After what seemed to be an authoritarian rant, I softened my voice and gave some heartfelt advice to Edgar. I really WAS concerned with his “feelings.”

Like the song, Cruel to Be Kind, real love is telling someone the truth, in the right measure, even when it hurts. The song goes on to say, “Cruel to be kind, means I care.

In my book System Busters; How to Stop Them in Your Business, I wrote a section called “Staying Encouraged.” I shared that, there will be times when there is no one around to encourage or motivate you, except yourself.

An ancient king, an actual giant killer, surrounded by many enemies, once said, “I encourage myself!”  What did he mean by that? His method or system was to encourage himself, in the Lord he trusted.

However, there are countless other methods to encourage ME when ME talks back, and says, “I don’t feel like doing this or that. My suggestion to ME, and YOU is:

How do you build bodily strength? By consistent exercise and consuming food that is good for the body.  In the same way, by consistently exercising the mind with positive input, and consuming materials that move your life and business career forward, you will become and remain the “Boss of YOU.”