Dust Off Your Mission Statement 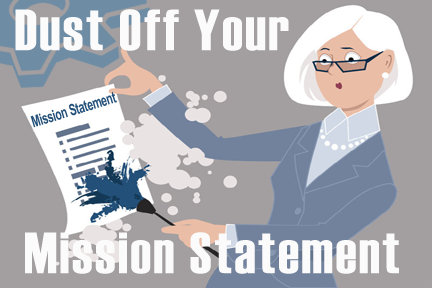 Do you have a written Mission Statement for your company? Is your company living up to it?

Our Declaration of Independence says, “All men are created equal,” yet at the time it was written, there was slavery in America.

Did that mean the Declaration of Independence was of no use?

Since some of our nation’s founding fathers were not totally living up to its standards, should our country have abandoned it?  God forbid!

Frederick Douglass was the great African-American reformer and orator during the Civil War. At one point, he used the power of the Declaration’s great words and ideals to hold our government accountable. He admonished them, “See, you are not living up to your own words, in your own written document!”

This most coveted document, along with our Constitution, is still sworn to today by U. S. presidents, senators and others. True statesmen believe it to be the “true north” guide for our nation. Our courts and judges measure our laws against these founding documents to determine whether our laws are on course.  Many have shed their blood to uphold the freedoms these extraordinary “Mission Statements” afford us!

A Mission Statement can become mere words on a piece of paper and left to gather dust somewhere. Or, it can become an active, living document, guiding you as you work toward your goal of building a great organization.

Years ago, as I was developing our systems, I called the company of an author of one of the books that had particularly inspired me. I was surprised when I was put directly into voicemail, where I left a message.  Judging by the author’s books, I felt certain this guy was so systematic I would hear back from him immediately.  But, a week went by and no response.  So I called again. More voicemail.

Practicing What You Teach

Remembering how this man had written extensively about good systems and great customer service, I called a third time. I was determined to remind him of his “declaration”—his own words.  Hearing the man’s familiar voicemail prompt again, I left name and number, and the following message.  “I am really disappointed that no one has gotten back to me.  I felt sure you would have had a simple system in place to check voicemails, and return calls.”

Almost immediately, I received a phone call from one of that company’s managers, and an email from the author himself.  As Frederick Douglass had done, I simply used their own declarations to remind them they should practice what they teach.

Have you dusted off your Mission Statement lately?

Every business needs to have a Mission Statement; a written statement of the vision, purpose and goals of the company.  If your company doesn’t have one, I believe you would find it extremely beneficial to consider and write one—and then stand on those principles going forward.  There’s an old saying that goes, “He who aims at nothing, hits nothing!”

Many companies have written a well-intentioned Mission Statement—even framed it and put it on a wall.  But, how often, I wonder, has anyone bothered to re-read it, or even remember what it said.  I believe many of those ultimately get stashed in a drawer or discarded altogether.

THE KEY:  Implement the best systems and processes to ensure your company will reach its goals, live up to its Mission Statement, and give you freedom from chaos.

After spending a dozen years totally systemizing our business so I could free up my personal life, I can tell you:

Order from chaos doesn’t just happen!  Truth is—fulfilling your Mission to build a strong company takes a lot of blood, sweat, and long hours, but freedom is its own reward!

Did I mention? GREAT SYSTEMS WORK!